The proportion of consumers in the UK accessing paid-for TV streaming services such as Netflix is expected to overtake those watching the free equivalents such as the BBC iPlayer this Christmas, according to new research.

Digital billing and payments specialist Paywizard recently surveyed consumers in Australia, Brazil, Germany, Singapore, the UK and US, and found that while there will be a spike in new SVOD subscriptions over the festive period, many of the new sign-ups plan to churn when the holiday season is over.

Paywizard has now drilled down into the UK survey responses and said the expected surge in SVOD subs over Christmas could tip the balance of internet TV usage in favour of paid-for services.

It said that 19% of UK viewers are currently using an SVOD service such as Amazon Prime, Netflix or NOW TV and 38% are accessing their free counterparts, including iPlayer, 4OD and ITV Player. If the anticipated 20% increase in paying online subs materialises then the paid-for total would hit 40%.

Paywizard noted that the UK has the highest level of consumption of free catch-up services, more than double the average recorded across the surveyed countries. 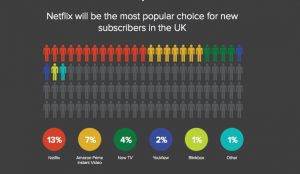 Among the new SVOD sign-ups Netflix is expected to lead the way with the greatest number, ahead of Amazon and then Now TV.

“The UK audience is well served with TV choices, ranging from traditional broadcasters and pay-TV providers to newer, high quality on-demand services. Yet the appetite for more content is only getting bigger, giving international services like Netflix and home-grown rivals like NOW TV a foothold in the market that may ultimately disrupt the status quo,” said Bhavesh Vaghela, chief marketing officer at Paywizard.

He added: “Our survey highlights that people are willing to pay to get what they want, but only if services can prove that their deal is worth it. For the industry, winning new customers may not necessarily mean that they’re there to stay.”