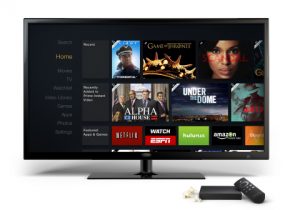 WATCH Disney Channel, WATCH Disney Jr., Animal Planet L!ve, MLB.TV and WWE Network apps have all been added to the platform, with the deals more than doubling its size.

E-Commerce giant Amazon launched Amazon Fire TV in April as a US$99 rival to boxes such as Roku, Apple TV and Chromecast.

The platform launched in the US with access to Amazon Prime Instant Video, Netflix and Hulu Plus.