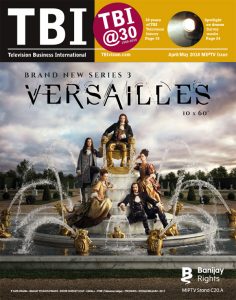 The TBI Interview: Kevin Reilly US programming veteran Kevin Reilly talks about aging down cable channels TBS and TNT, how to find hits and take risks, and why the future is all about betting on great content

TBI @ 30 A retrospective look at how the international television business has changed since TBI first published back in 1988, with views from former editors and key industry figures

Drama Survey Some say there is a drama bubble, but every year that it doesn’t pop breeds more and more confidence in global scripted TV. Does our exclusive survey promise more of the same?

New forms of funding There are plenty of ways to get a show made, but what are the pluses and pitfalls of each option? Andy Fry speaks with the industry to find out

Company profile: Mediawan France’s newest production and distribution group has made waves locally since launching last year, and now has its sights on the European market. Pascale Paoli-Lebailly reports

Women in TV Female producers are finally having their voices heard, and have capitalised on the new faith and interest with commissionas and deals, but there is still a way to go. Kaltrina Bylykbashi reports