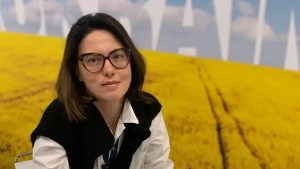 Here, Daria Leygonie-Fialko, founder & producer at Space Production and co-founder of The Organisation of Ukrainian Producers (OUP), discusses co-productions and the trend of dramas based on real life.

What is the biggest growth area for your company this year?

The biggest growth area for Space is co-production, which our company came to from two sides. On the one hand, even before 2022, we decided to go beyond the local Ukrainian market and conquer Europe. And in 2022, we were prompted to do this even more so by Russia’s war against Ukraine, as a result of which the Ukrainian television market collapsed. Now we are entering the production of five shows together with producers from Italy, France and the UK.

If we talk about OUP, first of all we expect expansion of our documentaries about the war in Ukraine. The first four films have already been watched in more than 20 countries and we plan to increase the coverage. We are also expanding our catalogue, we have more than 10 documentaries in the works now. Among them are documentaries about the life of Ukrainians during the occupation, about propaganda, which has become a new form of weapon of mass destruction, as well as a film exploring the phenomenon of ‘cyber warfare’.

What is the key trend going to be this year?

The main trend will be modern, deep, dramatic stories based on real events. If the credits don’t have a picture of the character who inspired the creators, the film is a failure.

What is your New Year’s resolution and why?

The main resolution of my year coincides with our mission of Space Production: ‘Make Ukrainian identity bloom’.

For me, the biggest headliner will be notable documentaries about the war in Ukraine, including those produced by OUP. And we are very much looking forward to our documentary Art In War, which is scheduled to premiere on Arte in early spring.

What show are you most looking forward to?

A series about the causes and consequences of the political regime in Russia, which led to the tragic events in Ukraine and also created a real threat of world war. This kind of series is long overdue for one of the leading international streamers to write and produce.