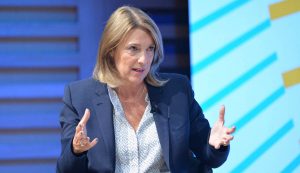 ITV believes the UK commercial broadcaster can defend itself from the predicted impact of a recession via global growth of ITV Studios (ITVS) and the soon-to-launch streamer ITVX.

The UK company has been buffeted over the past six months since unveiling details around its ad-funded ITVX service, with shares plummeting after ITV said it was planning to spend a further £160m ($172m) on new content for the service.

Carolyn McCall, speaking at RTS London today, admitted she did not understand why markets had performed such a “mechanical downgrade”, but said ITVX would provide huge potential for the broadcaster alongside its channels business.

“The reason we didn’t take any money from the channels is because all those channels are doing well and they are all profitable,” she said. “We still get big numbers – 6, 7, 8 million viewers for events such as the football. So we have this fantastic ability to do both things. ITVX is AVOD led so we can monetise it… we can do highly targeted advertising and it’s doing very well.”

In a later session, ITV’s MD of media & entertainment Kevin Lygo said the new streamer would also allow the commercial broadcaster to broaden its programming, with shows that have less broad appeal able to be commissioned.

“ITV [flagship channel] has to be all things to all people. We need mass appeal… and with ITVX we are moving into more niche shows that don’t need to have broadness,” he said.

Lygo also pointed out that even creative hits such as Love Island will only attract a certain sort of audience, hence it being on ITV2 – a strategy he will repeat with the upcoming reboot of Big Brother.

“Normally these shows get one million or two if you’re lucky so the danger is that if you had it on the main channel, there’d be talk it’s not working. The way it works best is if you flood the channel and I’m not sure it would be appropriate for ITV, which has a public remit and could scare people.”

Amid an uncertain economic background, McCall also downplayed fears that the launch of ad-funded services from previously SVOD-only players such as Netflix would impact its own operations, with money still going predominantly to “primary broadcasters”.

The ITV CEO added that she also expected to see production division ITVS grow “in absolute terms and as a percentage within ITVS”, with the division currently bringing in 50% of revenue.

McCall added that ITVS remains a “growth area of the business”, pointing to acquisitions such as Plimsoll Productions, and said the production-distribution arm would “give us a bit of a cushion” amid uncertainties over the current ad market.