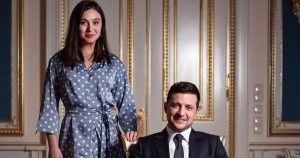 Jeff Wachtel’s Future Shack Entertainment has acquired the rights to adapt Ukrainian journalist Iuliia Mendel’s memoir The Fight Of Our Lives, recounting her time as press secretary for president Volodymyr Zelenskyy during the run up to the Russian invasion.

The memoir, which was just published by Simon & Schuster imprint Atria/One earlier this month, traces the parallel careers of Mendel, from student to journalist to press secretary, and Zelenskyy, from comedian to president to global figure.

Mendel’s memoir explores many of the key events preceding the 2022 Russian invasion; from meetings between Zelenskyy and Putin and other European leaders, visits to the front lines in Donbas and fielding press inquiries after the infamous phone calls between then US president Donald Trump and Zelenskyy.

LA-based Future Shack Entertainment was launched by former USA Network and Universal Content Productions studio president Jeff Wachtel last July, with the backing of Endeavor Content-backed Blink49 Studios and Roku. He is producing The Fight Of Our Lives with in-house producer Jon Cotton, who found the property.

“We are very fortunate to be working with Iuliia Mendel, one of the bravest and most insightful writers working today, a woman who inspires us all by having an impact on the world at a very young age,” said Wachtel. “Her first-person account of life in Ukraine is heart-wrenching, uplifting and provocative. This is exactly the type of story that Future Shack is dedicated to making.”