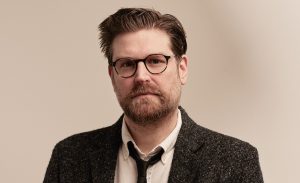 Glisk and Menger have three projects in the works: audiobook series Ghostbox and Monster 1983 are being adapted as TV series, while his debut novel When The Strangers Came – set to publish in August – is being developed and adapted for the screen.

The deal is the first major move by Glisk, which was launched by the former head of head of fiction at RTL Television, Philipp Steffens, and Splendid Studios’ MD, Julie Link, in January.

The prodco is producing scripted and unscripted shows, as well as formats, for German buyers, while also striking international multi-genre co-productions on shows with global appeal.

Steffens, who is married to Link, created and produced miniseries The Valley for TNT Germany, as well as The Last Cop (Der Letzte Bulle), whose format sold worldwide.

Details of the pact have been kept under wraps but Menger said he was “convinced that this will start a comprehensive, long-term, and successful partnership.”

Link and Steffens added: “We believe in shining a light on talent and investing in long-term relationships with creatives, so we’re thrilled a writer of such critical acclaim has entrusted us with developing and creating scripted adaptations of his renowned audiobooks as well as his yet-to-be-released new novel.

“One of our aims as a company is to take German concepts and talent to a global audience, so we hope this is just the beginning of an ongoing collaboration with Ivar as we have big plans to build his brand.”

Ten-hour long audiobook Ghostbox is a mystery trilogy that tells the story of a young Berlin journalist Lena Gruenwald who wants to solve her brother‘s mysterious suicide, while Monster 1983 is a three-season mystery thriller audio drama co-written with Anette Strohmeyer.

The latter is set in the small coastal town of Harmony Bay, Oregon, in the summer of 1983 and traces a series of mysterious deaths that occur when a prisoner transport crashes into a cliff and a Russian spy disappears without a trace.

When The Strangers Came is set on a remote island and focuses on a 15-year-old girl who has lived in almost complete isolation since early childhood. She only has her parents and her little brother for company as they spend their days fishing, baking, playing – but also living in constant fear of ‘strangers’ who want to take revenge on their father for testifying against one of them many years ago.

The deal was handled by Sebastian Möllmann of Möllmann Bießmann Rechtsanwälte and Marc Koralnik of Liepman AG Literary Agency, as well Matthias Braun of Studio Legal.