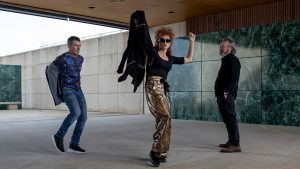 The firm will produce both scripted and unscripted content and sees Cruz re-team with Mediapro, who she has worked with on past projects including comedy-drama feature Official Competition.

“I have always been enthusiastic about telling new stories and contributing to the filmmaking process, so I decided to form Moonlyon with The Mediapro Studio,” said Cruz.

“With more demand than ever for stories from diverse backgrounds and new parts of the world, I am very happy to be able to continue my work as a producer with a company that I know intimately and that has valuable international positioning experience. Our goal is for Moonlyon to become a quality benchmark with a personality of its own.”

The show, which has already sold into seven countries, has aired three seasons on Channel 10 and Reshet 13 in Israel, while a second season of the format is currently in production for Amazon Prime Video in India.

It also recently aired in Austria and Greece among others, having been developed and produced by United Studios of Israel and created by Ran Dovrat, Avi Belkin and Ohad Perach.

La Famiglia follows the lives of a perfectly normal suburban family living in the divorce capital of the country as they attend therapy sessions.

Kids entertainment firm WildBrain is expanding its reach across APAC by launching new offices in Singapore, Taipei and Seoul.

The licensing team, who are part of WildBrain’s existing Shanghai operations, will also be expanded and renamed WildBrain CPLG China. The new and existing operations will service the entire APAC region across approximately a dozen countries.

Maarten Weck, EVP & MD of WildBrain CPLG, will lead the APAC expansion and be responsible for the management and growth of its team and business across the region.

WildBrain’s current licensing team in Shanghai, managed by Jianbo Wei, MD for China, will be integrated into WildBrain CPLG and expanded. Wei will also continue to oversee WildBrain’s content business in China.

The agency is now looking to rapidly build its leadership, management and wider marketing and licensing teams to drive the expansion, with new positions open in APAC and London.