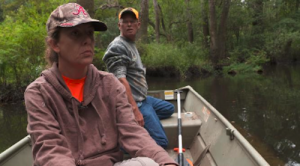 Monster In The Shadows

Sky Crime and Sky Arts in the UK have picked up rights to documentary duo Monster In The Shadows (3 x 52 minutes) and On Broadway (1 x 82 minutes) from Espresso Media International.

Sky Crime will broadcast Monster In The Shadows in April, following its debut on NBCUniversal’s Peacock in the US. The three-parter investigates the disappearance of Alabama teenager Brittney Wood, who disappeared in 2012 after finding out her family were part of a state-wide child sex ring.

On Broadway explores the history of the US theatre industry and features Hugh Jackman, Helen Mirren, Christine Baranski and
Ian McKellen. Espresso has already licensed the title to NENT (Viaplay) for the Nordics, Channel 8 (Israel), Al Jazeera (MENA), SBS (Australia) and Sky NZ.

Room To Improve S11 & S12 has been sold to the German operator, with TVR Romania acquiring the first four seasons of the home-renovation show.

The show is into its 13th season on RTÉ and has previously been bought by Channel 5 in the UK, AMC Networks for Spektrum Home and Foxtel Australia.

RTÉ has also closed a trio of deals for Cheap Irish Homes, which has just been greenlit for a third series. US-based Glocal Media’s Best of British Television channel, South Africa’s The Home Channel and Aer Lingus have all snagged rights. Cheap Irish Homes will also be available on VOD platform Amazon Prime.

The new series of both Room To Improve and Cheap Irish Homes are headlining RTÉ’s slate of lifestyle programming at MIPTV. Others on the slate include 100 Years of Ulysses and Speechless.

Foxtel in Australia has acquired Sarah Beeny’s New Life In The Country from Hat Trick International (HTI), which has also struck deals around the world for the factual series.

Both seasons of the show, which was produced by Outline Productions for the UK’s Channel 4, have been picked up by Foxtel for its LifeStyle channel, while Denmark’s TV2, Greece’s Tanweer Alliances, AMC Networks for Hungary, New Zealand’s TVNZ, Africa’s The Home Channel, Thailand’s Cineplex and France’s M6 Group AVOD platform 6play are among other buyers.

BBC Studios (BBCS) meanwhile, has taken the first 8 x 60 mins series for BBC Earth in Poland, which follows property expert Sarah Beeny and her family as they swap the urban jungle for a new life in the country.

BBCS has also licensed Britain’s Beautiful Rivers With Richard Hammond for BBC Earth in Poland and Africa produced for Channel 4 by Cardiff Productions. The 4 x 60 mins series, offers a new perspective of the rivers Severn, Test, Clyde and Derwent, is also headed for Australia under a deal with SBS.