TBI Tech & Analysis: All eyes on US content’s decline in Europe 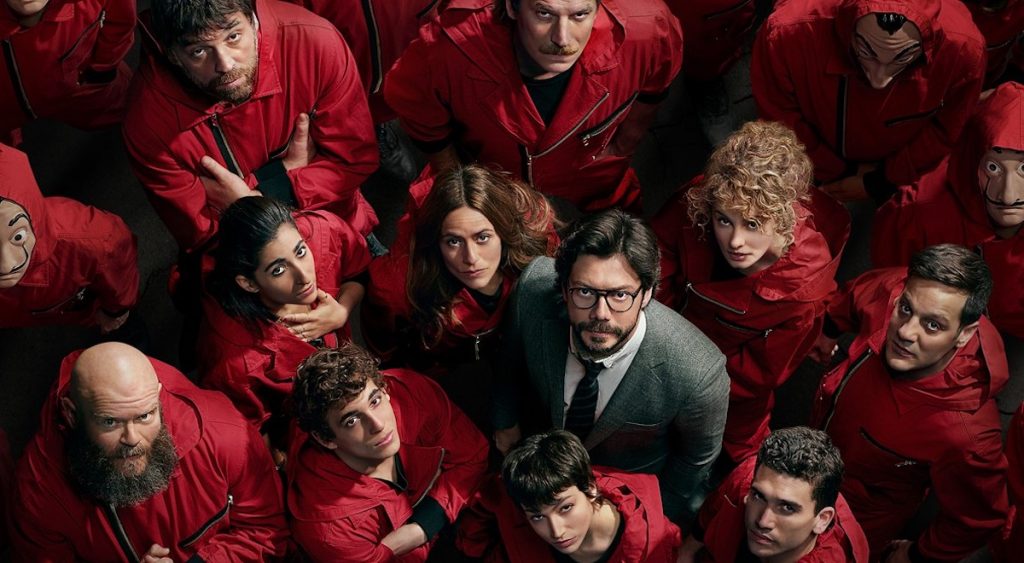 American TV shows have long been the dominant global force on the content front, but demand from viewers around the world is now shifting.

Streamers have provided the catalyst for much of this, with subscribers becoming more open to shows from outside the US. Interest in local programming is soaring, but viewers are also looking for fresh ideas from countries that a decade ago were all but overlooked by then-nascent SVOD’s and broadcasters. 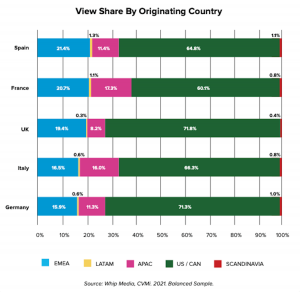 Streamers have provided the catalyst for much of this expansion, with subscribers becoming more open to shows from outside the US.

Domestic programming is also in huge demand, but viewers are also looking for fresh ideas from countries that a decade ago were all but overlooked by then-nascent SVOD’s and broadcasters.

Recent findings have highlighted just how the market is changing. Using data collected by TV Time (an app that counts more than one million active monthly users in France, Italy, Germany, Spain and the UK (FIGSUK)), researchers found that over the last three years, US content has declined an average of 10% as a share of overall viewership in those territories.

The findings have been revealed in The World & The US: The Rise of International OTT Platforms Is Changing The Balance Of Programming In Europe, a paper produced by licensing & data firm Whip Media and MIPTV, which takes place next week in Cannes.

Despite the fall, US content remains a mainstay for viewers across the five major European markets that make up FIGSUK. But there are clear differences in what viewers in each country are watching.

Italy and Germany proportionately view EMEA-produced content less than other EU countries, for example. France watches more from APAC, mostly in the form of Japanese anime, while the UK watches less of it than the other countries.

The decline of US content consumption in France, Italy, Germany, Spain and the UK has been largely replaced by increased viewing of shows from Japan and South Korea, with the latter’s hits such as Hellhound and Squid Game driving those figures. 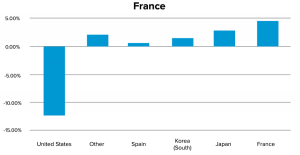 France can be seen to have considerably reduced its viewing of US content, with domestic content consumption rising by almost 5% since 2019 as American-based series viewing declining by more than 12%.

A similar picture emerges in the UK, where US content viewing is down by almost 7%, with aforementioned Korean and Japanese proving more popular with viewers.

Germany offers a slight nuance on this trend, with US viewing down over 7.5% and Japanese and domestically-source content viewing up, while the global popularity of Spanish programmes such as Casa De Papel has been reflected in its home country too.

The change in view share of US content in Spain dropped by almost 10% between 2019 and 2022, the research claims, while domestic programming saw its share rise by around 4%. Again, Japanese and Korean shows were also up by low single digit percentages.

Next week, TBI will take a deeper dive into Spanish content to explore how domestic viewers’ tastes have changed over the past three years and explore how two major streamers – Amazon and Netflix – have take different strategies to secure engagement.

(Data above was collected from the TV Time app. Samples were balanced in each country by age and gender to reflect each country’s population. ‘View Share’ is defined as the portion of all views, for selected filter criteria, belonging to a specific piece of content.)