Nickelodeon to “supercharge” franchises, with renewals and spin-offs for ‘PAW Patrol’ & ‘Transformers’ 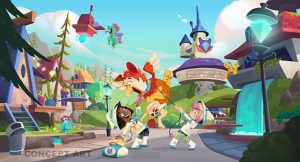 Paramount kids brand Nickelodeon is expanding some of its biggest franchises, such as PAW Patrol, Transformers and SpongeBob SquarePants, through spin-off shows, theatrical outings and recommissions.

Its annual upfront presentation this week detailed plains to “supercharge” its franchises with new animation, pre-school and live-action content across streaming, linear and digital platforms – as well as at the box office and through like live tours and family festivals.

As part of this expansion, Nickelodeon has recommissioned SpongeBob SquarePants for a 14th season, while handing a tenth run to PAW Patrol, along with an order for a spin-off centred around the character of Rubble.

Meanwhile, a feature-length Baby Shark movie is in development for Paramount+ in the US, as well as a special featuring music superstar Cardi B, an original live-action spin-off from The Loud House and a season seven renewal for animated series Transformers, as well as a new action-comedy spin-off with Transformers: EarthSpark, set to debut globally on Paramount+ in November, and a fifth season pickup for Blue’s Clues & You!

More than 40 projects are currently in active production for Nickelodeon Animation across series and movies, with the 2022-23 pipeline also including the return of ’90s Nick Jr. mascot Face in Face’s Music Party, a brand-new interactive music variety show; new animated preschool series Bossy Bear, based on the popular children’s books by David Horvath; HexVet, a new 2D and CG-animated series, based on the eponymous BOOM! Studios graphic novels by Sam Davies; and renewals of the hit series Big Nate, Blaze and the Monster Machines, Middlemost Post and Are You Afraid of the Dark?

Brian Robbins, president & CEO of Paramount Pictures and Nickelodeon, and CCO of movies and kids & family, Paramount+, commented: “As consumer behaviours and the family dynamic shifted, we went all in on meeting kids on every platform they’re embracing, especially streaming on Paramount+, where our considerable library and originals like Kamp Koral: SpongeBob’s Under Years, Star Trek: Prodigy and Big Nate drive significant audiences to the platform.”