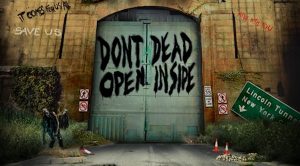 AMC Networks has commissioned a new spin-off in its The Walking Dead franchise, which will follow fan-favourite characters Maggie and Negan battling zombies in post-apocalyptic New York City.

The six-part Isle Of The Dead will see actors Lauren Cohan and Jeffrey Dean Morgan reprise their roles from The Walking Dead, and also serve as executive producers on the series.

The spin-off is set to debut on AMC+ and AMC in 2023 and will see Maggie and Negan traveling to a crumbling Manhattan long ago cut off from the mainland.

“This is a very big day for the expanding universe we are building around The Walking Dead,” said Dan McDermott, president of entertainment and AMC Studios for AMC Networks. “It not only adds another compelling series to this collection, it extends our storytelling around two unforgettable characters fans have grown to love, hate or hate and then love in Maggie and Negan, brilliantly inhabited by Lauren and Jeffrey.

“It also lets us explore a corner of this universe located on the island of Manhattan, with an iconic skyline that takes on a very different meaning when viewed through the lens of a zombie apocalypse.”

After launching on AMC in 2010, the original series, The Walking Dead, is currently airing its 11th and final season, with existing spin-offs, such as Fear The Walking Dead continuing on, and a slew of other series in the universe having previously been announced as in the works.

AMC has confirmed that a spin-off focusing on the characters of Daryl Dixon (Norman Reedus) and Carol Peletier (Melissa McBride) after the original show ends has been greenlit for a 2023 premiere. The series will be run by current The Walking Dead showrunner Angela Kang and co-created by Kang and Scott M Gimple.

The network is also developing a series titled Tales Of The Walking Dead with Gimple, a new episodic anthology which will focus on new and existing characters, backstories and stand-alone stories.