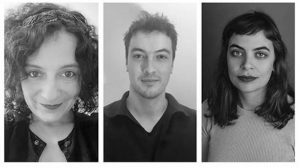 Farrugia will focus on comedy drama series. Before joining BBC Studios, she spent five years at Benedict Cumberbatch’s SunnyMarch where she helped build the TV slate and developed a wide range of comedy drama and drama series. She will work on an as yet unannounced comedy drama production which shoots later this year.

Hough will develop new projects in addition to working on the upcoming production of a new BBC Two comedy, shooting this autumn. Before joining the team, he was script editor at Sister Pictures on This is Going to Hurt which is currently airing on BBC One and BBC iPlayer. He previously worked for several years in development at Tiger Aspect Drama, including as a script editor on ITV series Good Karma Hospital.

Heliotis joins BBC Studios Comedy Productions having worked most recently on Sister Pictures’ The Power. Amongst other projects, she is working as script editor on the upcoming third season of Trying for Apple TV+. Her background is in comedy and drama with previous credits including War of the Worlds for Fox/Canal+, The One for Netflix, The Power for Amazon and Trying for Apple TV+.

Josh Cole, head of comedy, commented: “Laurie, Ben and Tash are super smart with impeccable taste. They will be working on a range of upcoming productions for multiple broadcasters and developing a new generation of era-defining comedies and comedy dramas.”