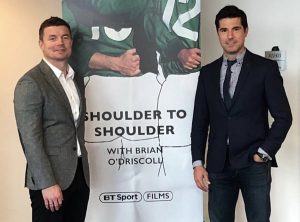 All3Media International will be its exclusive distributor. This multi-company partnership aims to accelerate 3 Rock’s growth in live sport and associated factual programming, in addition to creating further branded and digital video and audio content.

The sports prodco was also behind Shoulder to Shoulder, a BT Sport documentary, which featured O’Driscoll and explored rugby’s unique unifying power in Ireland, and is in production with After for BT Sport, which lifts the lid on mental health within professional sport.

“This deal demonstrates how keen we are to build on our existing expertise in both live sports production and sports based factual programming across different platforms,” said All3Media CEO Jane Turton.

Brian O’Driscoll and Craig Doyle added: “We feel privileged to have the unrivalled expertise and resources of North One, Little Dot Studios and the All3Media Group to help put 3 Rock on the map.

“High quality sports, factual and entertainment content is at the heart of what we do, and we are now looking forward to bringing that programming to wider audiences.”