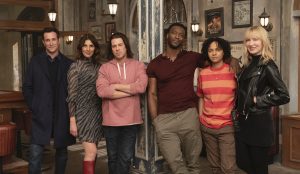 “Bringing back these characters has been a dream come true and working with such incredible people as the team at IMDb TV has been an absolute pleasure. So excited we get to do it all over again,” said Electric Entertainment’s Dean Devlin, the show’s co-showrunner and executive producer.

Italian animation prodco Gruppo Alcuni has launched Cartoon Artist, a training program that aims to create a new generation of professional animators in the country.

The course will launch in February 2022, within the Autonomous Province of Trento’s educational and training courses (IFTS), with applications submitted by 7 January 7. The selection will be narrowed down to 14 participants who will study for a full year, with over 1,000 hours in classrooms, labs and internships.

“Animation in Italy has always been about creating amazing stories and characters, but then often producing them outside Europe. This just didn’t seem right to me. So, when I found the perfect cultural and educational scenario here in Italy’s Trentino region, I decided to create something absolutely unique and innovative.

“We’re starting with a small team, but we’ll grow until we can give Italian animation the same quality as a Renaissance Master Craftsman workshop,” said Francesco Manfio, CEO of Gruppo Alcuni, which is behind shows such as Mini Pet Pals and Leo da Vinci.

The Game Of My Destiny

Global Agency plays ‘The Game Of My Destiny’

Global Agency has acquired the international distribution rights to the Turkish drama series The Game Of My Destiny.

The series, which is produced by NGM Medya for STAR, tells the story of Asiye, whose world is turned upside down when her daughter is attacked by a neighbor, leaving them to rebuild their shattered lives.

When the stranger Mahir finds them refuge in the home of his powerful family, she is shocked to face her ex-husband Cemal who abandoned the family years ago.

Izzet Pinto, founder & CEO of Global Agency, said: “We are proud to represent the most exhilarating TV series of recent times. The main characters have reached large fan groups around the world.

“The series has a successful production company, an empowering scenario, highly successful actors and is airing on a good channel. We believe that it will be very successful thanks to all these factors.”