The world’s biggest media market is a battleground between online giants Amazon and Netflix, yet it is Fox’s AVOD streamer Tubi that offers the most content to US viewers. Omdia’s Tim Westcott unwraps a raft of other surprising realities from the country’s vibrant OTT sector.

Using data from our partners Media Biz, Omdia’s Digital Content and Channels service tracks the film and TV content line-ups of US on demand services every quarter.

Amazon has mostly ranked highest (out of 27 platforms) in terms of content so far, but in June 2021, AVOD service Tubi took top spot with 92,995 hours of content compared to Amazon’s 45,997. Hulu moved ahead of the e-retailer into second place with 46,527 hours, although that’s only because we’re listing all of Amazon’s AVOD content under the IMDbTV brand. 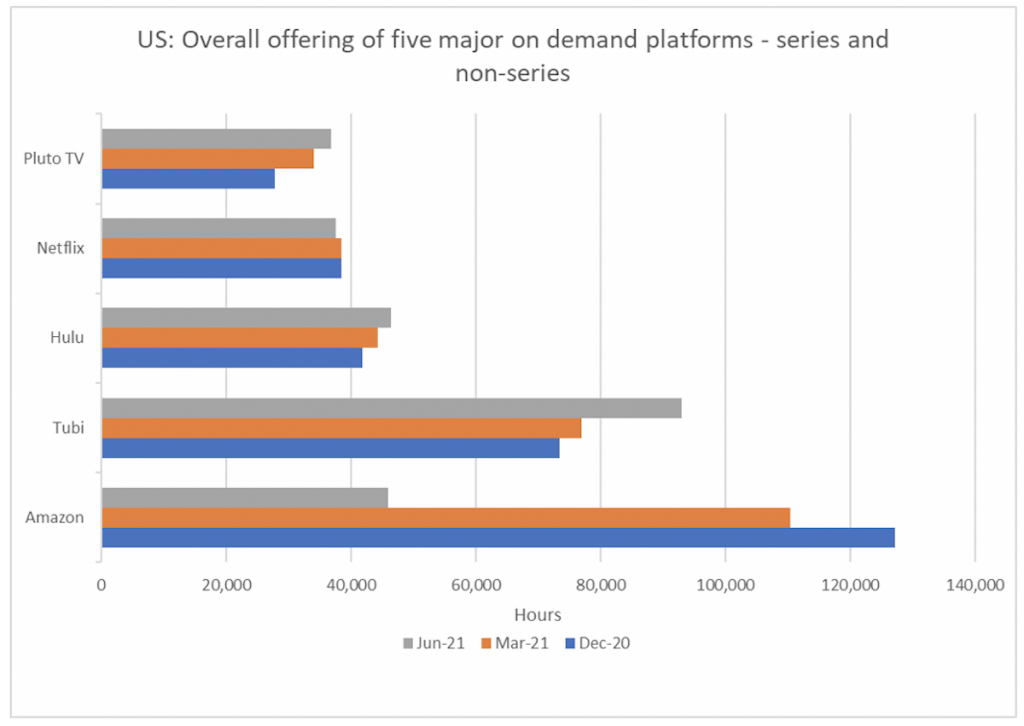 Even so, Amazon has significantly trimmed its SVOD catalogue over the last six months – possibly clearing the way for MGM’s TV output once the acquisition goes through.

Tubi’s catalogue has been swelled by content from Fox Corporation since its acquisition in 2020, but the platform is also betting that it can capitalise on subscription fatigue by continuing to aggregate third party movies and TV series in volume.

At the other end of the scale is the small but high-budget offering of Apple TV+, while somewhere in the middle are the studio-backed SVOD services HBO Max, Disney+ and Paramount+.

Scripted drama, meanwhile, remains a key weapon in the battle for the subscriber dollar and more than 50% of the offer for AMC, HBO, Starz and SundanceNOW in June 2021 (see below).

But Unscripted – ranging from documentaries to reality competition and dating shows – is big on linear TV in the US and is significant, not least on factual-specialised Discovery+ and, indeed, Disney+. Children’s content is the main part of the Disney+ proposition, but also features on the new wave to studio-backed platforms as well as Amazon and Netflix. Anime (mostly from Japan) also occupies an important niche. 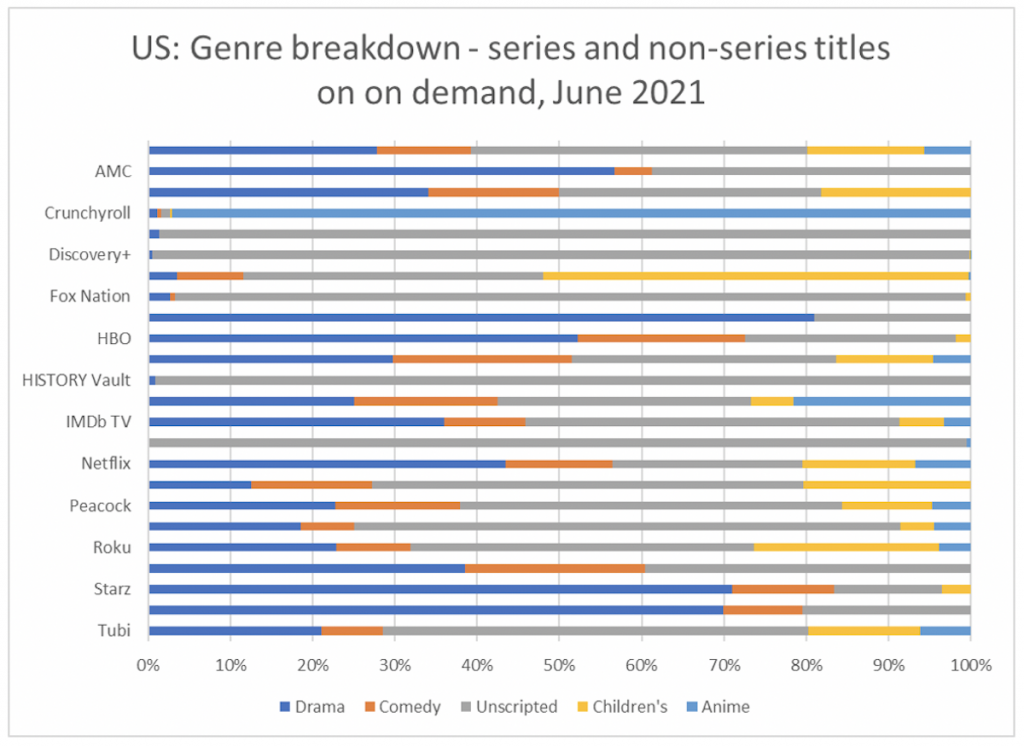 There is no doubt that the on demand world has opened the US market to a more polyglot range of content than was ever available in the linear world.

Naturally, US content makes up the vast majority of content on services like Apple TV+, Disney+, Paramount+ and Peacock but there is more diversity on Netflix (in particular), factual platform CuriousityStream and SundanceNOW. As well as the anime-focused Crunchyroll, recently sold by AT&T to Sony-owned Funimation.

On the movie front, Tubi also took top spot (according to June 2021 numbers) with close to 9,000 titles, followed distantly by another AVOD service, Pluto TV, which had 2,681.

For more recent movies, however – appearing on on demand in some cases only weeks after theatrical release – Hulu looks to have the biggest offering. In June, we counted 19 of the top 200 movies at the 2020 US box office on Hulu, with only one on Tubi.

It should be aded that 2020, with cinema theaters closed in mid-year, was atypical. We also note that all Walt Disney distributed titles go to Disney + and all Warner Bros titles go to HBO, while Paramount and Universal releases are not so far earmarked only for in-house on demand platforms.

Tim Westcott is senior principal analyst for digital content & channels at Omdia which, like TBI, is part of Informa. The excerpt above is from SVOD TV & Movie Content Tracker, available as part of Omdia’s Digital Channels & Content Intelligence.