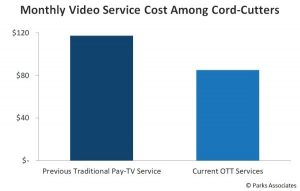 Cord-cutters in the US are spending an average $85 per month on alternatives to pay TV, according to new research.

Parks Associates’ latest report has found that the those cutting their cable subs are spending roughly $30 less per month than what they were paying for traditional pay TV services.

But while there are similarities between the consumption habits of cord-cutters and cord-nevers, the former group spends nearly twice as much monthly on OTT services as the latter.

In total, there are more than six million ‘cord-nevers’ in the US. Despite consuming content solely via online sources, cord-nevers are also less likely to own key streaming video products such as smart TVs and streaming devices. Some 58% of cord-cutters by contrast own a smart TV, thew report found.

Elizabeth Parks, president of Parks Associates, said: “Cost concerns drove many consumers away from traditional pay TV, and OTT services are delivering on the promise that they can offer desired video content at a considerably lower price point.

“But we find 47% of cord-cutters subscribe to four or more OTT services, so in order to have an optimal video portfolio, they are creating their own video bundles by stacking OTT services.”

Parks added: “As they migrate away from traditional pay TV, cord-cutters seek service offerings that more closely meet their video content needs with the added value of flexibility at a lower cost. OTT services have to continually deliver flexibility and customisation at a reasonable cost to keep these subscribers engaged and retain them on an ongoing basis.”