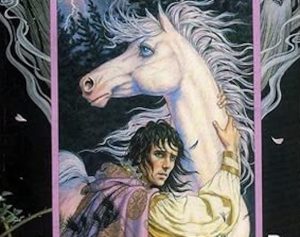 Kit Williamson, creator of Netflix’s LGBTQ comedy series EastSiders and Brittany Cavallaro, author of the Charlotte Holmes book series, will write and produce the series, based on Lackey’s novels, marking the first screen adaptation of the franchise, which spans 58 books.

The series will be executive produced by Radar’s Ted Field, producer on the Jumanji and Riddick movie franchises, as well as EP on Amazon’s upcoming series The Wheel Of Time, based on Robert Jordan’s novels.

Anthony Tringali, Maria Frisk and Michael Napoliello will produce for Radar, with the first season to be based upon The Last Herald-Mage trilogy, which includes the novels Magic’s Pawn, Magic’s Price and Magic’s Promise.

The trilogy follows the story of Vanyel, the openly gay and persecuted son of a Vadmaran noble, who finds acceptance when he is ‘Chosen’ by the Companion Yfandes – a magical horse-like being with the power to bond with their Chosen and trigger the potential for psychic abilities—and magic.

As he begins his training, Vanyel grows from a troubled and heartbroken trainee to become the most powerful Herald-Mage in the history of Valdemar—and the one hope for Valdemar against an implacable foe bent on eradicating magic from the kingdom entirely.

“Vanyel in The Last Herald-Mage series was one of the first gay characters I encountered, and as a recently out 16-year-old I can’t stress enough the impact that these books had on me. The Valdemar series was far ahead of its time in the portrayal of LGBTQ characters, and Lackey’s writing afforded them a level of depth and complexity that is still very rare, especially in genre storytelling,” commented Williamson.

Cavallaro added: “It’s an absolute dream to be adapting the Valdemar books alongside Radar Pictures and Kit Williamson. Twenty years ago, Kit and I became friends at boarding school, and bonded over our love for Mercedes Lackey’s work, and we’re so excited to begin the process of bringing it to the screen.”