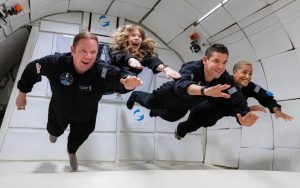 Netflix has commissioned Countdown: Inspiration4 Mission To Space, a docuseries following the upcoming September launch and mission of the all-civilian flight crew on the SpaceX capsule.

The SpaceX Dragon mission, which has been named Inspiration4, is a privately chartered space flight, commanded by billionaire Jared Isaacman, the founder and CEO of Shift4 Payments, and is intended to raise support for St. Jude Children’s Research Hospital. Among his crew are St. Jude physician assistant Hayley Arceneaux, Lockheed Martin engineer Christopher Sembroski and NASA astronaut candidate Sian Proctor.

The Netflix series will follow the crew as they prepare for and blast off on a three-day flight to low Earth orbit at an altitude higher than the International Space Station, chronicling their selection and intensive training, as well as the liftoff and mission itself.

It will be the streamer’s first docuseries to cover an event in close to real-time, with the first two episodes debuting on 6 September in the led up to the mission. Parts three and four will premiere on 13 September, two days before Inspiration4’s 15 September launch date. A feature-length finale will then drop at the end of the month.

The streamer has also ordered StoryBots Space Adventure, a hybrid live-action animation special for children to debut ahead of the mission.

Written by Erik Weiner, the StoryBots special will see the Inspiration4 crew help to answer some of the kids’ space-related questions.

Words & Pictures, meanwhile, was founded by Schell and Chernin Entertainment earlier this year in 2021, with a focus on non-fiction content.