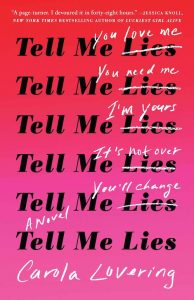 Disney’s US streamer Hulu has picked up the adaptation of Carola Lovering’s novel Tell Me Lies, which has Grace Van Patten attached to star.

The show, which will use the same title as the novel, is being produced by Disney-owned 20th Television and Vice’s US prodco Refinery29.

The story follows a young couple who meet at college and tracks how their seemingly mundane choices lead on to irrevocable consequences.

Meaghan Oppenheimer will write the pilot and executive produce, along with Emma Roberts, who struck a first look deal at Hulu last year, and Karah Preiss under their Belletrist banner. Lovering will serve as a consulting producer.

Tell Me Lies joins a growing slate of book adaptations for Hulu, which has also been behind 11/22/63, The Handmaid’s Tale, Little Fires Everywhere and Normal People, the latter produced with the BBC.