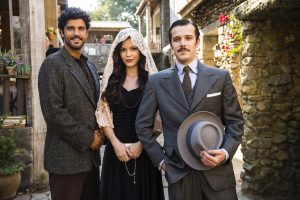 Tempo De Amar (aka A Time To Love)

Mexico’s Imagen Televisión has picked up rights to Brazilian telenovela Tempo De Amar (aka A Time To Love) from regional giant Globo.

The historical drama, which has already been sold by Globo into Bolivia, Costa Rica and El Salvador, is set after World War One and follows the lives of a poor farmer and the rich daughter of an olive oil business owner.

It is directed by Jayme Monjardim and based on an original story by Rubem Fonseca.

ViacomCBS International Studios (BVIA) has struck a “long-term agreement” for the co-production of audiovisual projects and content with Italian firm, the Leone Film Group.

The agreement will see the two entities develop and create Italian-language content together, including scripted and unscripted formats.

Laura Abril, SVP & head of VIS EMEA and Asia, said: “At VIS we continue to collaborate with the most talented content creators around the world and this agreement aligns perfectly to our strategy. We can’t wait for these stories to come to life and reach the homes of our global audiences.”

Raffaella Leone, CEO of Leone Film Group, added: “Together, we look forward to delivering original and innovative Italian projects distinguished by an international quality that will appeal to viewers everywhere and have the potential to be distributed worldwide.”

All co-produced content will be distributed directly or indirectly through third parties by ViacomCBS Networks Italy.

Afrikans-language lifestyle channel VIA is preparing to air the second seasons of factual entertainment format The Gran Plan and dating show Date In Reverse.

The Gran Plan, which was developed by Artza Productions and Armoza Formats, was created by Dafna Prenner and Shai Eines, and sees a trio of grandmas become life coaches.

Date In Reverse, created by Josefson-Volley Formats, Shenhar Productions and Daniella Slavik, follows two singles looking for love who get to know each other by experiencing a relationship’s most meaningful milestones in reverse.

Both formats are sold by ITV Studios-owned Armoza Formats.