TBI Weekly: What next for France’s scripted industry?

French drama festival Série Series returned to the Fontainebleau recently, marking for many execs their first physical event for more than a year. Marie-Agnès Bruneau reports on what for some was an emotional occasion and explores what lies in store for the French scripted industry after a tumultuous period.

Série Series became one of the first events to take place physically earlier this month, with a mixture of well-orchestrated live sessions and French executives physically present with some European executives attending via video interviews.

The weather was warm enough for drinks and socialising outside, and attendees came in their hundreds. Many had the strange feeling that everything was back to normal and nothing had changed, while at the same time feeling as if everything was different – and wondering if it really will be ‘business as usual’ any time soon.

Although not a focus in the panel discussions, the shadow of the pandemic was floating around and many executives admitted that they were moved in attending their first event for more than a year.

Others discussed their experiences of delays in drama delivery over the past 12 months and there were also sessions that explored the global pandemic’s impact on the volume and types of shows commissioned.

And yet, virus apart, all signals look good for French drama. The number of commissioners and outlets are expanding, along with the creative diversity of the programmes being ordered.

Streaming platforms with big appetites are continuing to develop shows and Série Series welcomed many of the newer players, including fledging SVOD BrutX, launched three months prior. It has recruited M6 and Canal+’s former top acquisition exec Nathalie Drouaire as head of acquisitions & international co-productions, and she has already made her first deal for Spanish series Veneno.

Drouaire, appearing during a joint Conecta Fiction session, said the show – which explores perceptions of trans identity – is representative of the kind of transgressive and emotional programmes the platform wants to get involved in as international co-pros.

There was a flurry of news emerging before and during the event, including Apple+ starting principal photography on Liaison, its first French show, and also an Anglo co-pro. It has been created by French writer Virginie Brac, and has top names attached such as Vincent Cassel and Eva Green.

The other major news was the release of the decree regulating French SVOD platforms, most notably requiring that they invest a minimum of 20% of their revenues in French production.

Streamers have not, however, been waiting for the official decree and had already begun investing prior to its formal unveiling. Jimmy Desmarais and Clémentine Gayet were presenting Netflix France’s originals line-up, explaining that the local team now comprises six creative executives “just for French drama”, including themselves. “We definitely want to make more series, and that’s why the team has expanded,” said Gayet.

Netflix France had its major hit this year with mainstream series Lupin, which not only was an international success but also managed to change the perception of French drama from the young local audiences, who are usually more into US series, Desmarais said.

He also stressed, however, the need for variety in programming and the necessity of pleasing different target audiences. Indeed, an example of another kind of experiment came as Netflix premiered the second season of Mortel, the supernatural teen series set in a disadvantaged Paris suburbs, in an outdoor public screening.

“We don’t have one audience profile, we have multiple viewer bases, and we aim to please each subscriber individually,” explained Desmarais. “When we do a horror show, we are not expecting the same results as Lupin, and we are not going to put the same amount of money in. Each show has its target audience.”

French action series and thrillers are a current focus at Netflix France, along with continuing comedies and romcoms. “Our creative challenge is to think big, we want to push the limit further,” said Desmarais.

Salto, the eight-month-old streamer from TF1, France Télévisions and M6, also appeared at Série Series and unveiled the first lessons learned from its viewers’ habits.

A majority of the subscribers are aged under 35, and many are hooked on the daily soaps appearing on Salto’s mother channels offered two days prior to their linear broadcast. “They are also watching shows that they wouldn’t have on the traditional channels,” stressed content director Thomas Crosson.

“Our viewers are very voracious, they are consuming four or five episodes per day, with international series often binged in a row. We need new shows every week, we permanently need to feed the beast!” he joked.

Salto, which sees itself as a French Hulu, is running some of the acquired and/or commissioned fare from its mother channels, while also experimenting with all kinds of formulas in terms of launch timing. It is also driving its own acquisitions, highlighted by shows such as Sherlock The Russian Chronicle, young adults TVNow series Even Closer, and BBC drama The North Water.

In terms of drama commissions, Salto is as a first step accompanying its mother channels in their desires to produce more ambitious projects by becoming a partner in some of them. The streamer, for instance, co-funded France Télévisions’ upcoming series Germinal, adapted from the classic Zola novel. “We are going to learn from that, the day will come when we’ll commission on our own,” Crosson said.

Germinal is also one of the first major projects to arrive on air from the Alliance, the European pubcaster club that France Télévisions put together with Rai in Italy and ZDF in Germany three years ago, in order to share the surging cost of production. Emerging from that initiative at Série Séries was Leonardo, the Italy-initiated first project of the Alliance, which was screened at the event having recently launched on Rai 1 to seven million viewers. 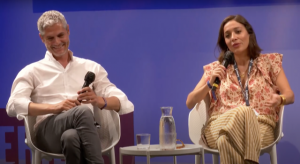 English-language Around The World In 80 Days is also in the works, and the Alliance is currently working on between seven and eight developments. France Télévisions is more active overall in international co-productions, including with other partners, said Nathalie Biancolli, director of international drama.

The other French broadcasters have also had to rethink their strategies over the past few years, and with drama’s long production process, they are now beginning to see the fruits of their efforts.

“The content on offer is at a level never reached before, it is more crucial than ever for TF1 to create the event and differentiate itself,” said Anne Viau, who is director of drama at the French network, which commissions 70 to 80 French drama episodes a year.

France’s leading channel has been renewing and retuning its series line-up of late and it has enjoyed a few hits already, including its recent move into crime comedy drama HPI (Haut Potentiel Intellectuel), which has been watched on average by nearly 10 million linear viewers (plus another two million in catch-up), a level the channel had not reached in 15 years.

HPI stars Audrey Fleurot in the role of a brilliant but quite original police auxiliaire. Fleurot was already starring in TF1’s successful first foray into costume mini-series (in which Netflix partnered), Le Bazar de La Charité, and Viau said the same female team of producers and actresses will return in another history miniseries, Les Combattantes, which is set during World War One. “We like the idea of continuing to travel time with them and that they tell us women’s input in history,” said Viau.

The channel wants to develop more “premium” miniseries across a vast range of genres, from crime and supernatural to romcom. “Miniseries are the current king genre, meeting todays’ consuming habits and engaging viewers over three four evenings,” she explained. It also makes it easier to access movie stars, and in the new strategy, “we need five stars cast,” she said.

French broadcasters have been ordering many more scripted adaptations, such as the reboot of Marcella and The Night Of, which are among TF1’s upcoming shows, but Viau says, as far as her channel is concerned, she still favours original scripts.

Canal+, meanwhile, outlined its success with La Flamme, which was adapted from US scripted format Burning Love and is “a parody of Bachelor, which managed to reach a much younger audience,” according to director of drama, Fabrice de la Patelière, who has a budget for 10 high concept series per year.

Like most networks, Canal+ wants to diversify its slate across more genres, as well as addressing a younger audience as well as its core 25-49 target. “Like everybody else, we are suffering from the fact that drama viewership is getting older,” he said. Last year, the pay TV channel had a hit with Validé, about the world of rap music and Patelière noted its effect on viewers. “Some young people took a subscription just to watch this series,” he said. Consumption at the pay TV channel has dramatically changed in a few years, “non-linear now makes up 80% of a series viewership,” he added.

The channel has also successfully expanded its medical dramas with Hypocrate and is mixing history and crime in Paris Police 1900, while continuing to go for a couple of international coproductions per year. They include StudioCanal’s War Of The Worlds, Franco-Italo western Django, and Franco-American story On The Verge, created by LA-based French comedian Julie Delpy.

Surprisingly, the latter also involves Netflix, which stepped in via the LA-based acquisitions team. “We knew the story required an American co-producer,” said Patellière of the series, which will launch on Netflix in the US at the same time as Canal+ in France. “We have a rather long exclusive window before it shows on Netflix in France,” he added.

Next to the artistic effervescence, tension is also rising on the topic of rights and IP. The global US platforms’ model – to often fund the entire budget and take all rights – remains an issue for independent producers.

During Série Series, the European Producer Club called for a code of good practice and to recognise the producer’s input, particularly when the prodco has developed the project and especially if that development is supported in Europe by public funding meant to support independents.

In that regard, the new French SMAD (on-demand audiovisual media services) decree is very ambitious. It requires that two-thirds of the streaming platforms’ obligation towards European and French production is independent, with a very stringent definition of independent: no coproduction shares, no distribution mandates, no cross ownerships.

But areas of uncertainty remain and some parts of the regulation remain in flux, with French broadcasters wanting a looser definition for ‘independent production’ and retaining international mandates. During Séries Series, Patellière mentioned that StudioCanal is now increasingly taking international distribution of Canal+ series and is now taking part in the meetings as well.

Over at M6, something of a newcomer in drama, a new division has been created that will commission its dramas and initiate some French scripted series through its audiovisual rights and movie subsidiary SND. It is another move indicative of France’s scripted industry as a whole, as the sector expands into new areas while navigating some fundamental changes to the way it operates.