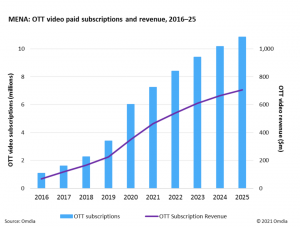 Max Signorelli, senior analyst for entertainment at research powerhouse Omdia, examines the current state of the OTT market in the MENA region.

The majority, 70% of the total of these subscriptions, came from the Gulf States, 10% from the Levant, and the remaining 20% from North African states.

In June 2020, Amazon launched its Prime bundle subscription in Saudi Arabia, following a similar launch in UAE one year prior. As with UAE, the launch saw Saudi subscriptions climb rapidly, doubling over the course of 2020 and set to quadruple in 2021.

In a year lauded for the growth of direct-to-consumer strategies, few new OTT video services launched in MENA. Instead, many content operators have opted for partnerships with established brands to distribute their content before any standalone release. 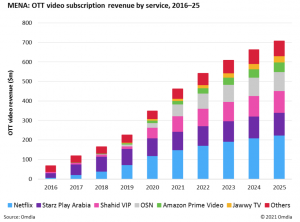 Revenue generated by OTT subscription video services in MENA reached $350m in 2020, up 55% from 2019. Such growth was a direct result of the significant rise in subscriptions in the year as opposed to the development of Average Revenue Per User (ARPU).

Netflix claimed the largest regional market share of revenue in 2020 with 33%, surpassing Starzplay Arabia. Netflix has always maintained strong ARPU in MENA, with this rising above $10 per month in 2020 following further rounds of price localisation.

Amazon and Jawwy TV claim among the lowest levels of ARPU in the market, but this is the result of their video services being bundled as part of wider consumer packages. This strategy will likely serve their growth well as they expand into new countries.

For MENA’s other services, their extensive range of partnerships have served them well in gaining subscriptions at the cost of ARPU. Nevertheless, this, combined with pricing typically lower than Netflix, makes their potential for growth much higher. 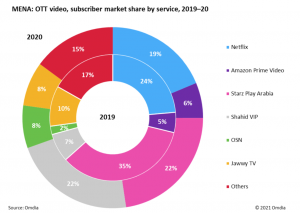 While most services saw strong growth in 2020 as a result of the COVID-19 pandemic, the majority of the year’s growth is attributable to the revamped performance of both Shahid VIP and OSN’s OTT service, which both saw YoY growth of more than 500%.

Shahid VIP quickly shot over one million subscriptions in early 2020 following its revamp from Shahid Plus. The service gained a significant amount of exclusive and original content and is now beginning to explore international markets.

OSN also revamped its WAVO service to better utilize the OSN branding. They also struck content distribution deals for Disney+ originals as well as a wave of new operator partnerships with telcos.

Meanwhile, paid subscriptions to Netflix and Starzplay Arabia grew by 40% and 15% respectively as both expand their content portfolios. For Starzplay, this is increasingly through partnerships such as its January 2021 deal to carry Discovery+ content.