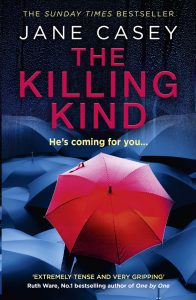 Sony Pictures Television-backed UK prodco Eleventh Hour Films has secured the rights to author Jane Casey’s thriller The Killing Kind and is turning it into a limited series.

Zara Hayes (Showtrial) and Jonathan Stewart (Meet You In Hell) will co-write the adaptation, with Hayes also set to direct, with author Casey will exec produce, alongside Jill Green, Eve Gutierrez and Paula Cuddy from Eleventh Hour Films.

The book, which is being published today by HarperCollins, tells the story of barrister Ingrid Lewis, who defends John Webster against stalking charges in court. However, Webster soon turns on her and the situation becomes suddenly more dangerous when a colleague is killed and Webster claims he is the only one that can protected Lewis.

Eleventh Hour Films is behind the Amazon Prime Video and Amazon-owned free streamer IMDb TV spy thriller series Alex Rider, which has been renewed for a second season, and earlier this year, the company acquired the rights to true crime podcast Hunting Ghislaine with plans to turn the show into a limited series drama.

“The Killing Kind is an exceptional thriller from the brilliant Jane Casey, which delivers the twists, turns and emotion to grip a global TV audience,” commented exec producer Paula Cuddy, creative director at Eleventh Hour Films. “Ingrid is a compelling protagonist, whose story is most timely as she navigates professional and personal ethics, her journey making us question ‘justice’ in every sense.”

Hayes added “I’m always looking to tell stories with compelling and complex female characters front and centre. When I read The Killing Kind it felt like the perfect fit. Jane’s book is a gripping, twisty thriller, all told through the eyes of Ingrid – a richly layered, intelligent woman who is working out what success means on her own terms.”