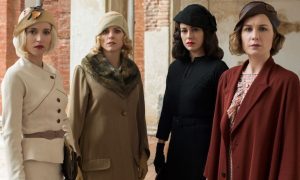 Apple TV+ has ordered a Spanish- and English-language thriller from the producers and creative team behind Netflix hit Cable Girls.

Now And Then is set in Miami with an all-Hispanic cast and explores the differences between youthful aspirations and the reality of adulthood, when the lives of a group of college friends are changed after a celebratory weekend ends up with one of them dead.

The show is from Spain’s Bambú Producciones and creators Ramón Campos, Teresa Fernández-Valdés and Gema R. Neira, who have also worked on dramas including Velvet and Grand Hotel.

Homeland’s Gideon Raff will executive produce and direct the first two episodes, while Campos and Fernández-Valdés will serve as showrunners. Neira and Campos are attached to write.

The series joins a raft of Apple originals, including fellow bilingual drama Acapulco, which was revealed late last year. Also on the slate is Masters Of The Air, Slow Horses, Pachinko, Shantaram, False Flag remake Suspicion, Korean drama Dr. Brain and Echo 3, an action-thriller set between South America and the US.

The commission also underlines Bambu’s ongoing growth, with the project joining recently revealed Nacho Vidal, An Industry XXXL for Lionsgate-owned streamer Starzplay. The prodco, which counts fellow Netflix drama Fariña (aka Cocaine Coast) among its extensive slate, is backed by StudioCanal, which took a stake in the firm in 2016.