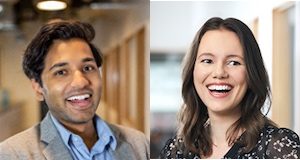 Mohan Mandali and Jasmine Russ become directors of development, with responsibilities across the slate retained from Bosch producer Fabrik Entertainment, which Bastin led until his departure.

They will also expand projects across a variety of genres and continue to report into president Melissa Aouate. Bastin told TBI last month that Fabel would look for scripted formats – he previously adapted DR drama The Killing for AMC and Netflix – and added that he also wanted to work with creatives from around the world to get their IP into the US.

Mandali joined Fabrik in 2019 before moving with Bastin to Fabel and has developed a raft of series, including a show based on world-famous neurologist Oliver Sacks and the recently announced Bosch spin-off in the works with IMDb TV.  He previously worked at HBO in development and started his career at ICM.

Russ has also worked on the Bosch spin-off as well as shows including Invisible Monsters, which is based on the novel by Chuck Palahniuk. She began her career at Peter Rasmussen Casting and moved to the US from Australia in 2014 before starting her career in development in 2018.

“Mohan and Jasmine are important members of our multinational team and their creativity and deep knowledge of genre storytelling has led to some of our most exciting projects currently in development and production,” said Bastin. “I am confident that their impressive contributions will continue to feed our growing pipeline as we strengthen our slate and industry relationships.”

“As we continue to nurture our relationships with creators and develop more powerful stories across genres, Mohan and Jasmine bring a fresh and diverse perspective to our development slate,” said Aouate. “They have been instrumental in creating and developing popular adaptations and series that continue to resonate worldwide.”

Fabel Entertainment was unveiled by Bastin in February, following his exit from Red Arrow Studios-backed Fabrik Entertainment, which produced the Amazon Prime Video drama Bosch. The future of Fabrik is unclear.