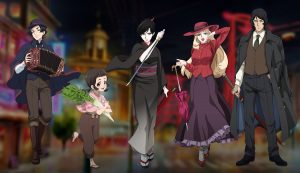 Joran The Princess Of Snow And Blood

The series, which is distributed internationally by Nippon TV and Hulu in Japan, will appear on Crunchyroll worldwide, excluding Asia, along with TV stations and platforms across Asia via Medialink and through its branded channel Ani-One, as well as on station Aniplus TV and platform aniplus.tv. In total, it will be distributed to more than 200 countries and territories.

In Japan, this series will air on Nippon, BS Nippon TV CS Nittele Plus starting in April, and with Hulu in Japan, each episode will be streamed one week before Nippon TV.

The 30 x 12-minute show is a Nippon TV co-production with Hulu in Japan, Bakken Record, Bushiroad Move, Bushiroad Music, and Dentsu Animations. Directed by Susumu Kudo, it is set in 1931 and follows a plot to assassinate the 94-year-old Prince Tokugawa Yoshinobu, who holds absolute control over Japan.

“Loaded with images that the world perceives as Japanese, Joran The Princess of Snow And Blood features intense action, serious human dramas, and a dark look and feel that I am confident will capture the hearts of anime fans across the globe,” said Kako Kuwahara, EVP, Anime Department, Nippon TV.

Both shows are based on toy brands owned by Hasbro.

The G5 series of My Little Pony will meanwhile return to the world of Equestria to introduce a new generation of ponies to viewers, who must embark on an adventure to return magic to the land.

The company, which launched at the end of last year, develops and produces kids content for Nickelodeon and other ViacomCBS brands, as well as third parties. It has plans to develop more than 30 new kids shows over the next three years across a range of genres.

The first-look deal with Boyega’s UpperRoom will see the prodco present three to five animation projects to the studio for consideration to develop into a long form series.

VIS Kids has also struck a first-look animation deal with Fred Seibert (Adventure Time) and his FredFilms, as well as partnerships with the UK’s Wildseed Studios, Israel’s Ananey Studios, Argentinean cartoonist Liniers, and others.