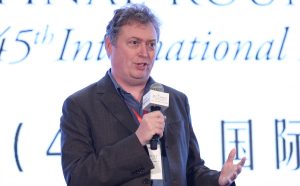 Body Of Water (8 x 50-minutes) has been created and is being written by Foley, and based on an original idea by Resinaro.

The show follows a British detective who becomes obsessed after a murdered man is found in the London’s Rover Thames. He then forges an uneasy alliance with a young Italian female investigator, who is looking into a similar case in Venice, with both bodies sharing mysterious markings on their skin.

Crispino and Bruno Zarka at Nucleus Media are attached as producers, with the film set to start filming in 2021 in both Venice and London, with a release date slated for late 2022.

“Soon after reading Fabio Resinaro’s idea, I immediately thought that Body of Water had a great potential. This was soon to be confirmed by our partnership with Nucleus Media Rights and now by the co-production deal with a such prestigious player as ZDF Enterprises,” said Crispino, founder and CEO of 3Zero2.

Robert Franke, VP of ZDFE.drama, described the show as “an exceptional project which will appeal to a global audience”.

Foley was most recently a series writer on Cold Courage for Lionsgate and Viaplay, and the upcoming Man Who Died for streamer Elisa. He also has shows in the works with Canada’s Blue Ant and has previously worked on films including Johnny Was and The Riddle, starring Derek Jacobi.