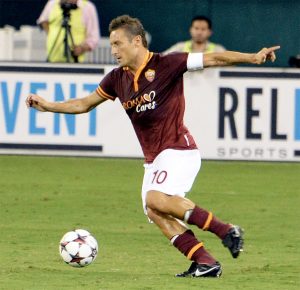 Sky has partnered up with Fremantle’s Italian producer Wildside on a drama about Italian football star Francesco Totti.

The six-part show – described as a dramedy – is based on Totti and Paolo Condò’s book Un Capitano, published by Rizzoli Libri, and is due to begin shooting in Rome later this week.

The story will track the last two years of the AS Roma player’s career, exploring his 27-year stint with the same club and his thoughts as he moves towards retirement. Pietro Castellitto (Freaks Out) is attached to star as Totti, with Suburra’s Greta Scarano among the cast.

Nicola Maccanico, Sky Italia’s EVP of programming, said the show would offer an insight into “the human side” of the player. “With this project, in conjunction with Wildside, we want to produce something deep-rooted in Sky’s DNA: to offer an alternative point of view,” he added.

Mario Gianani, CEO at Wildside, continued: “Narrating the lives of figures that made sports history in the TV series format is a type of challenge that is becoming increasingly widespread. It’s a type of narrative that touches audiences emotionally, beyond the account of athletic achievements.”