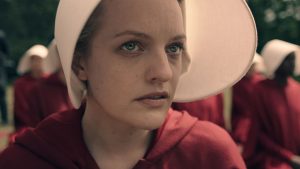 Elisabeth Moss in The Handmaid’s Tale

Love & Squalor Pictures is being launched with former WME agent Lindsey McManus, who has been named president of film and TV. The new venture will focus on creating TV and film content for multiple platforms.

Its first project will be an anthology for Hulu titled Black Match, in which Moss will star. The series is a psychosexual neo-noir thriller set in modern day Los Angeles, written by Ian McCulloch and with Mike Barker attached to direct the pilot.

Love & Squalor has also optioned the rights to three novels, the upcoming Imperfect Women by Araminta Hall, which will be adapted into a series, and Smacked by Eilene Zimmerman and Idaho by Emily Ruskovich, which will be made into films.

“I am so excited to have formed this company and established this partnership with Lindsey to find material ourselves and have real ownership as producers,” said Moss. “We want to develop strong, unique stories for the big and small screen that we feel are inclusive and represent the world that we all see around us.

“We are very proud of the slate that we are building, comprised of projects that run the gamut from broad, commercial fare to darker, more challenging works.”

Bert Salke, president of Fox 21 TV Studios, added: “Lizzie Moss, in our opinion, had been a huge part of two of the greatest series of all time — Mad Men and The Handmaid’s Tale (Top Of The Lake wasn’t too shabby either). That’s not a coincidence. She brings an intelligence and an emotional vulnerability that is exceedingly rare not just among her contemporaries but among the strongest actors in the history of the medium.

“That same powerful intelligence and great taste is also evident in Lizzie’s work as a producer, and we feel lucky and excited to be working with her and Lindsey as they embark on their company’s journey.”