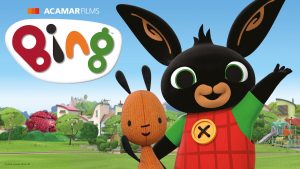 The show, produced by Acamar in association with Dublin-based partner Brown Bag Films, is based on the books by Ted Dewan, following the adventures of a pre-school rabbit named Bing.

In the Netherlands, NPO Zappelin has relicensed series 1 to 3, following the premiere of series 4 on the channel in January, while in the Nordics, SVOD and DVD service SF Kids has also recently acquired series 4.

Series 1-3 has also been relicensed by NRK in Norway, RTP in Portugal, TFO in Canada and MiniMini+ in Poland, while TVO Kids in Canada has opted to expand their Bing offering, having also ordered the latest run of 26 x 7-minute episodes.

“We take a highly considered approach to the global distribution of Bing and we’re delighted to be working with such a fantastic set of partners across these territories,” said Eroulla Constantine, director of sales and distribution at Acamar Films. “Bing’s success around the world is a testament to how relatable and recognisable Bing’s everyday ‘micro-dramas’ are to young children and their grown-ups.”

Autour de Minuit’s superhero show Super Caribou (48 x 11-minutes and 2 x 22/44-minute specials) is headed to Germany with Studio Hamburg’s presales for Kika and NDR. The show has also been picked up in Spain by Canal Panda pay TV, and Slovakia’s RTVS channel.

The third season of Ubisoft Motion Pictures’ of Rabbids Invasion (234 x 7-minutes) will be broadcast on Radio-Canada’s ICI.Tou.Tv Extra SVOD platform, while the company’s FVOD platform ICI.Tou.Tv has picked up both season two of Studio Hari’s The Owl & Co (156 x 7-minutes and 1 x 13-minute special) and the 39 x 5-minute Vivement Lundi! series Science Of Botheration.

The distribution house has also acquired the rights to Folimage and Les Armateurs’ new 52 x 5-minute series, Ana Pumpkin, which follows the daily adventures of a little five-year-old girl and her dog.

Julia Schulte, SVP of international sales at France TV Distribution, said: “Our sales team is really proud that Super Caribou has seduced strong networks like NDR and KIKA in Germany. This confirms the quality and creativity of the French indie animation production that has the power to travel around the globe, like our series produced by Autour de Minuit. And we are confident that our new program Ana Pumpkin will be as charming and irresistible as Super Caribou.”

The deal has been struck between Lat Am animation firm Pinguim Content (formerly TV PinGuim) and Canadian coproducer partner Kondolole Films, with the sale negotiated by Sara Cooper at distributor Meta Media.

The 52 x 7-minute series is now available in English and French on the Canada-based streamer, which is aimed at children under 12 and their families and is available in more than 140 countries. In addition, Amazon Prime in the US is also airing a number of episodes from the series.

Ping And Friends follows the adventures of Ping and her pals as they find musical inspiration in all sorts of unlikely places. While having fun with words and sounds, they come up fantastical tunes and sing songs.