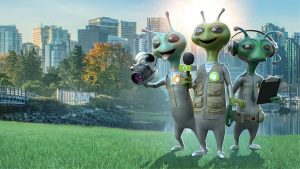 The 26 x 30-minute series was co-produced by eOne and and POP, in collaboration with Netflix for global release.  The Nine Network commissioned the series in Australia, produced with financial support of Create NSW.

The series follows the slapstick misadventures of an extra-terrestrial television news crew as they try to understand the “wild, baffling and sometimes ‘just-plain-weird’ life” on the newly discovered planet Earth.

“Alien TV is a great example of what international co-productions are all about,” said POP Family Entertainment CEO and Alien TV producer Carmel Travers. “I am thrilled that through Netflix and Nine, this irreverent comedy will be beamed worldwide giving audiences everywhere a funny look at the world – as ‘aliens’ might see us.” 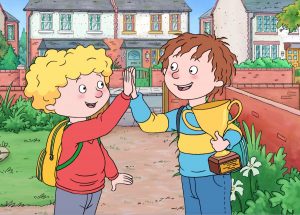 Netflix is airing the first animated feature length special of Novel Entertainment’s Horrid Henry in the UK this weekend.

Horrid Henry’s Wild Weekend, from the UK prodco, includes the usual voice cast from the animated series, along with British TV presenting duo ‘Dick and Dom’ (aka Richard McCourt and Dominic Wood) who are reprising the roles they played in the live-action Horrid Henry: The Movie. It will be broadcast on 6 June.

This new special reveals what happens when “Henry is unexpectedly chosen to join the Ashton Adventurers to compete for the Brainbox of the Year Cup, Mum and Dad try to slip away for a night without the kids and Great Aunt Greta has a teenager to stay.”

Watts, who is Novel’s co-founder, said: “Horrid Henry continues to be hugely popular on Netflix in the UK and we are thrilled to have a feature-length animated commission.”

The fifth season of Horrid Henry is currently airing on Netflix in the UK and also on Nickelodeon UK & Ireland. A total of 250 episodes are now available with recent sales including MBC (Middle East), Alati International (Russia),  Atlantic Digital Networks (Canada) and Amazon Prime Video (India, Pakistan and Sri Lanka). 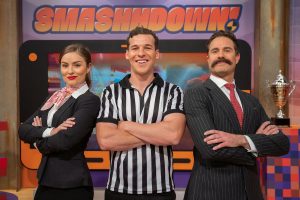 Brainbuzz spreads “science by stealth” in Australia and Hong Kong

The sales represent early deals for Fred Media, which recently acquired Brainbuzz and Smashhdown!, both of which were produced by Australia’s Nine Entertainment Co., for its kids’ catalogue, from Australia’s Nine Network.

All 197 x 30-minute episodes of “science by stealth” series Brainbuzz are headed to ABC Australia, ABC’s Indo-Pacific channel, which is available in 40 countries, while 52 episodes were picked up by Hong Kong Cable Television, as part of a wider kids’ package that also includes WTFN Productions 40 x 30-minute series We’re Talking Animals.

Courtney Hicks, Fred Media’s acquisitions manager commented: “Nine Network has a long track record for producing innovative, involving and entertaining kids’ shows, so we are delighted to have picked up two of their best with Brainbuzz and Smashhdown!

“The large number of episodes produced for each speaks to their ongoing success and will prove advantageous for international broadcasters and platforms looking for strong and enduring brands to help grow their young audiences.” 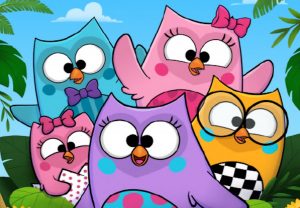 Bubu And The Little Owls

‘Bubu And The Little Owls’ fly to Kidoodle.TV

Children’s streaming service Kidoodle.TV has acquired the preschool series  Bubu And The Little Owls, following an agreement with US producer and distributor Nucleus Media Rights.

The A Parent Media Co. Inc.-owned streamer will feature the first two season of the 52 x 11-minute animated series globally on connected devices including iOS, Android and AppleTV.

The series, which follows the adventures of a curious young owl will air in both English and Spanish.

“We are honored to have Bubu and the Little Owls join Kidoodle.TV’s illustrious children’s lineup,” said Bruno Zarka, CEO of Nucleus Media Rights. “Now parents and children everywhere can embrace our loveable little owl on a safe online platform that they know and trust.”