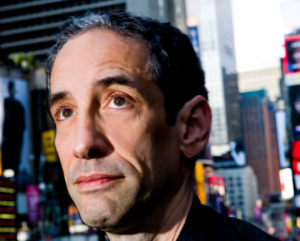 Exponential follows Rushkoff as he takes viewers on a journey from the beginning of the digital age through its transformation by big business to the possibilities for a more human-centred future.

Rushkoff is attached to write and narrate the show, which will explore the inception of the internet and its impact on consumerism, and include interviews with world-famous CEOs on the impact of their companies.

Arte has commissioned the “provocative series” through its German partners WDR and RBB, with Submarine and Pumpernickel producing and representing the series for worldwide distribution.

Rushkoff said: “For the past 25 years, I’ve watched as the tremendous potential of the digital age was surrendered to the mindless pursuit of exponential growth. Everyone – and I mean everyone from cab drivers to parents to journalists to teenagers – is ready to see the story of how this unfolded, who is responsible, and what we can still do about it.”

Femke Wolting, co-founder and CEO of Submarine, and Christoph Jörg at Pumpernickel Films, are producing the series.

They added: “It’s almost impossible to overstate how the emergence of the internet has impacted our society, our lives and our global economy. With his trademark clarity, curiosity and insight, Douglas is the perfect guide to make sense of the digital age, taking us on a fascinating ride from the idealist inception of the net to its corruption and ultimately – where we could go next.”

Rushkoff is host of the Team Human podcast and author of Team Human, as well as a dozen other books on media, technology, and culture, including Present Shock, Program Or Be Programmed and Media Virus.