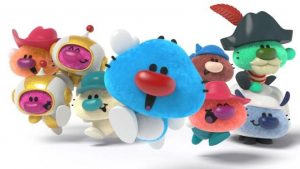 Netflix has commissioned a pre-school show spun-off from kids franchise Oggy And The Cockroaches, marking the streamer’s first animated original from France.

Oggy Oggy is being produced by Xilam Animation and is based on the popular kids franchise Oggy And The Cockroaches, which first debuted 20 years ago.

The CGI spin-off went into development earlier this year with Xilam, which has retained second window global linear TV distribution and merchandising rights in its deal with Netflix.

The story will follow Oggy as he is freed from the ceaseless tyranny of the cockroaches and lives in a fantasy world inhabited by a vibrant community of cats.

“With this new development of our successful series Oggy And The Cockroaches, Xilam intends to establish the Oggy universe as one of the most important franchises for the pre-school target audience,” said Marc du Pontavice, CEO at Xilam, which has also worked with the streamer on forthcoming animated movie I Lost My Body.

“Xilam is one of France’s most prolific producers, having developed a distinct expertise in non-dialogue animated comedy for kids. We’re certain Oggy’s kindness and sweet charm will warm the hearts of preschoolers everywhere,” said Dominique Bazay, director, kids & family international originals at Netflix.