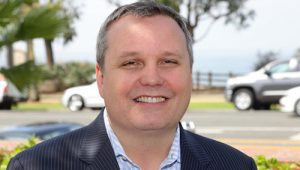 Gould worked for The New York Times’ TV division before joining Discovery in 2004, where he was behind shows including Miami Ink for TLC and American Chopper for Discovery Channel.

He later worked for US cabler Travel Channel as head of programme development and VP of product development, working on series such as Man vs Food, before joining UK-based Zig Zag Productions in 2011.

Gould spent five years with the Danny Fenton-helmed company before moving to become east coast EVP at producers trade body PactUS, where he worked with David Lyle, who passed away in 2016. After PactUS was folded into NPACT, Gould joined factual prodco Continuum Entertainment in 2017, taking the role of CEO.

Matt had an infectious laugh and a personality to match. He lit up the room with his boundless enthusiasm. He was one of life’s ‘can do’ people. Zig Zag CEO Danny Fenton

Gould’s wife Stephanie confirmed via Facebook that he had passed away on Tuesday (13 August) evening due to complications relating to a heart condition.

A fundraiser has been set up to support Gould’s three daughters, accessible here, while a memorial service is to be held on Friday at 11am ET at Congregation Ohr Shalom, 67 Kent Place Blvd, Summit, New Jersey.

“He was a leading light in the UK and US industries and in setting up PactUS with the late David Lyle. Matt’s infectious laugh and enthusiasm will be sorely missed by his friends both here and around the world.”

Zig Zag founder Fenton said: “I had the pleasure to know Matt Gould. I worked with him both as a buyer and later as the Head of Zig Zag USA. He was most importantly my friend.

“Matt had an infectious laugh and a personality to match. He lit up the room with his boundless enthusiasm. He was one of life’s ‘can do’ people. He could edit, shoot, pitch, direct – the lot! He wasn’t just a one-man band – he was a one-man symphony orchestra.

“His impact on the industry knows no bounds. He produced thousands of hours for NY Times TV and went on to Discovery where he created many hits for TLC. From there he went to Court TV which became Tru TV and it’s there we first met. He loved our shows so much he joined the company. We had 5 great years together until he joined Pact USA where he worked with my other great mentor David Lyle.

“I was due to see Matt in NYC last week but he had come down with pneumonia. Typically, he messaged me to say, ‘Don’t worry I’ll see you next week. I just need the weekend to recover.’”

“Shockingly Matt has now passed and a light has gone off in my life. My thoughts are with Stephanie and the girls at this tragic time.”