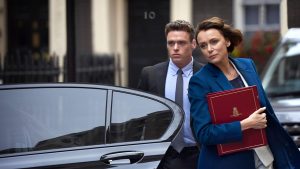 The streaming giant, which boarded the Richard Madden-fronted thriller at script stage, will release the drama around the world, except for the UK, Ireland and China, following a deal with ITV Studios Global Entertainment.

The drama, which is created and written by Jed Mercurio, follows a former war veteran who becomes the bodyguard of the Home Secretary and is forced to decide between his duty and his beliefs.

Bodyguard will roll out on the SVOD on 24 October.

It is the most watched new drama launch of the year in the UK, with its premiere episode drawing a consolidated audience of 10.4m (40.9%) for BBC1.

ITV Studios president of international Maria Kyriacou said: “Bodyguard has gripped the nation with its twists and turns. It’s a perfect example of a show produced locally which has huge global appeal. Through our partnership with Netflix, we can’t wait for audiences around the world to enjoy the show as much as audiences here in the UK.”