Cineflix Rights is betting on Russian drama Ordinary Woman, with plans in place for a Mipcom launch in Cannes next month. 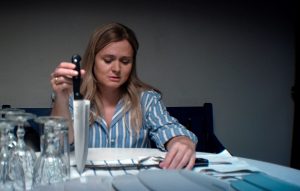 Produced by 1-2-3 Production and Look Film, the series tells the story of a Moscow florist who – unbeknownst to her family – leads a double life as a brothel owner. However, when one of her sex workers is found dead, threatening to reveal her secret, she must learn to cope and get her life back on track.

The programme was the first Russian drama to be shortlisted in France’s Series Mania competition earlier this summer, where star Anna Mikhalkova won the best actress prize.

The deal was brokered by Julien Leroux, senior VP of global scripted co-productions at Cineflix Media and Richard Life, VP of acquisitions for Cineflix Rights.

Leroux joined the distributor earlier this year from Paris-based super-indie Newen Group, where he served as deputy MD of international sales, acquisitions and marketing.

Chris Bonney, CEO of rights at Cineflix Media, said: “An Ordinary Woman promises to be a breakout Russian drama for international audiences and we’re thrilled to add it to our growing scripted slate. It’s a timely and fascinating look into life in contemporary Russia, combining strong female characters, an exceptional cast, and stunning cinematography. And it has a taut, multi-layered plot which unfolds throughout a series suiting either a weekly transmission or stacking for viewers who want to binge on a new gripping drama.”

Valery Fedorovich, CEO of TV-3, added: “Cineflix Rights is the perfect partner to distribute An Ordinary Woman, which will sit alongside their other eye-catching, standout dramas which provide compelling viewing such as Marcella and Pure. We were also impressed with the team’s vision and commitment to maximising the global audiences for this far from ordinary series.”