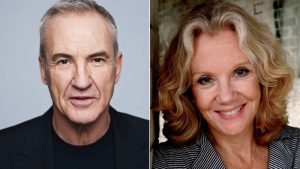 AMC-owned Acorn TV is partnering with the BBC on family drama Pitching In.

Starring EastEnders actor Larry Lamb and Hayley Mills (pictured), the drama will air in the UK on BBC1 Wales and BBC1 Daytime and on streaming platform Acorn TV in the US.

It will be produced by Broken indie LA Productions, with Acorn Media Enterprises co-producing in the US and Australia.

The drama – which began filming earlier this week – is set around a caravan park on the north Wales coast and tells the story of three generations of the same family who are struggling to make the best of an unusual situation.

ZDF Enterprises is to distribute the programme outside the US.

The drama is the latest original from Acorn, whose parent group RLJ Entertainment was acquired by AMC for US$65m (£49m) in July.

LA Productions producer Colin McKeown said: “Drama can take many shapes and forms and impact on an audience by informing, educating and fundamentally entertaining. While it is important when it is socially relevant, it is equally important when it simply makes you laugh. Pitching In provides an audience with a lovely feeling of wellbeing and hopefully provides a warm smile.”