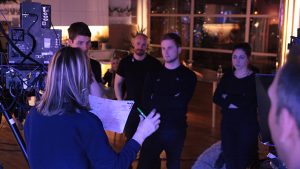 A new report has revealed a worrying drop in the representation of female directors in the UK TV landscape. According to a new report from Directors UK, Who’s Calling the Shots? A Report on Gender Inequality among Screen Directors working in UK Television, Television episodes directed by women fell by 2.98 percentage points between 2013 and 2016, while only one in four television programmes were directed by a woman

As a result of the findings, Directors UK is calling for broadcasters to commit 0.25% of their commissioning spend for all programme making to fund career development and industry access schemes to close the gap.

The research showed that all the main UK broadcasters reported a decline in the percentage of episodes directed by women between 2013 and 2016. Within that, factual programming showed the most significant decrease, by 9.8 percentage points, while children’s programming came second with a 4.5 percentage point decline.

Directors UK Board member and factual director, Toral Dixit said this was “Not acceptable that women make up one third of working directors in the UK but only direct one in four television programmes. To generate a shift towards gender equality, broadcasters must embrace positive interventions across all genres and deliver fair and transparent hiring practices for both freelancers and staff. Targets must be set and tracked through mandatory monitoring so successes can be built on and replicated across the industry.”

Following the report, Directors UK has called for action. Top of the list is the introduction of a levy system to fund industry access and career development schemes for underrepresented groups. It suggests broadcasters commit 0.25% of their commissioning spend across all programme making to fund the scheme. Second, it says Ofcom should make it mandatory for all UK broadcasters to monitor and publicly report their diversity characteristics of all those making programmes for them, to include freelancers as well as permanent staff.

In addition, it calls for Ofcom to set targets for broadcasters to use production crews whose gender, ethnic and disability makeup mirrors that of the UK population, both in front of and behind the camera, by 2020. Finally Directors UK says it should also fall to companies in the TV sector to take a lead. One suggested remedy would be for all hiring firms to commit to fairer recruitment practices in line with other industries to improve equal access to opportunities for all; in particular, externally advertising roles, the introduction of written references for freelance production staff and a requirement for women to make up 50% of those being interviewed for senior production roles.