Tandem, Bron Studios set for thriller from The Bridge scribe 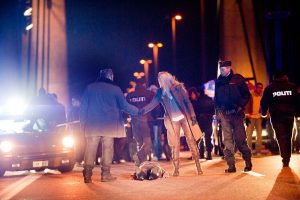 Tandem Productions, a Studiocanal company, and Bron Studios are set to produce a gritty dramatic thriller from The Bridge (pictured) writer Måns Mårlind.

The two production outfits will co-produce the eight-part series with Germany’s ZDF. It will be co-financed by a line-up of major international networks, including Viaplay, CCanal+, Canal + Poland and Holland’s NPO.

Set in Berlin, Shadow Play centres on the story of Max McLaughlin, an American cop who arrives in the city in the summer of 1946 to help create a police force in the chaotic aftermath after the war.

Shooting will commence in spring 2019. Mårlind will write all the episodes and will direct four alongside his directing partner Björn Stein.

Bron Studios is financially backed by Creative Wealth Media and has offices in Canada and the US, while Tandem is Munich-based.

Rola Bauer, managing director/partner at Studiocanal TV said: “We are thrilled to be collaborating with Bron Studios, who also embrace this vivid and thought-provoking drama from the talented Måns Mårlind.

“To have such a wealth of partners from key markets onboard now is testament to Shadow Play’s huge potential to become a major returning series on the international stage.”