BBC Studios is set to develop its partnership with Doha-based beIN Media Group by signing a memo of understanding that establishes a strategic partnership between the two companies, “to explore opportunities for the co-development, co-production and distribution of content in Qatar, the Middle East and Turkey.” 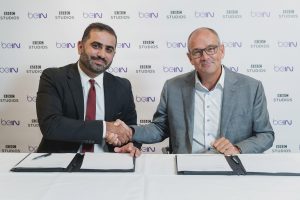 The partnership will run for three years from this month, and extends the creative ties between the two groups. As part of the agreement, BBC Studios and beIN say they will “Seek opportunities for the development and/or production of content, while exploring the acquisition of additional BBC Studios’ digital content by beIN to complement the current BBC programming on beIN’s platforms.”

Earlier this year, beIN launched BBC Earth, BBC Studios’ global factual brand, as a linear channel across the Middle East and North Africa via its direct-to-home service. BBC Earth joined BBC Studios’ pre-school brand, CBeebies, which has been on the beIN platform since 2016.

Paul Dempsey, president for global markets at BBC Studios, (pictured right) said: “This MOU builds on BBC Studios’ successful existing partnership with beIN Media Group and stands to bring our expertise in development and production to an even wider international audience. It further demonstrates our commitment to working with partners globally to create world-class programmes.”

“We are incredibly excited about furthering our trusted partnership with BBC Studios,” said Yousef Al-Obaidly, deputy CEO at beIN. “This memorandum of understanding establishes a new milestone of cultural collaboration between our organisations, bringing together two of the strongest global entertainment brands to deliver stand-out original content, cutting-edge innovation and – ultimately – more value to our customers. We are also delighted to support BBC Studios’ intention to explore broader business opportunities together with beIN Media Group in Qatar.”