Cord cutting will accelerate at a “much faster rate than is widely though,” predicted Apple CEO Tim Cook on the company’s latest earnings call, with Apple positioning itself to take advantage of these market changes. 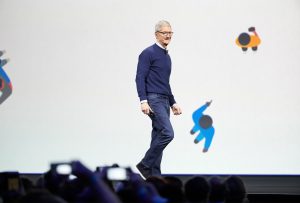 Responding to a question about the company’s original content strategy, the Apple boss said he feels “really good about what we will eventually offer,” having brought a string of high-profile television executives and talent on-board in the past year.

Cook described cord-cutting as a “key catalyst” for its work in this space and said that on the periphery of this Apple TV has seen unit sales and revenue grow by “very strong double digits” during its fiscal third quarter.

“We’ve seen major growth in sales since the introduction of Apple TV 4K last fall as video providers around the world choose Apple TV 4K to deliver their subscription services,” said Cook. “Later this year, Charter Communications will begin offering Apple TV 4K to its customers in nearly 50 million US households, providing access to live channels and tens of thousands of on-demand programs via the Spectrum TV app on Apple TV 4K, iPhone and iPad.”

Since then the company has appointed former Channel 4 content chief Jay Hunt as European creative director of worldwide video and BBC Films veteran Joe Oppenheimer as a creative executive for its international team.

It also recently signed multiyear deal with Oprah Winfrey to create original programming, which Cook said on yesterday’s earnings call that Apple “couldn’t be happier” about.

“As you know, we hired two highly respected television executives last year and they have been here now for several months and have been working on a project that we’re not really ready to share all the details of it yet, but I couldn’t be more excited about what’s going on there,” said Cook.

“We’ve got great talent in the area that we’ve sourced from different places and feel really good about what we will eventually offer.”

For the quarter ending June 30, Apple posted revenue of US$53.3 billion, an increase of 17% year-on-year, with international sales accounting for 60% of sales.

Cook hailed the results as “Apple’s best June quarter ever” and its fourth consecutive quarter of double-digit revenue growth – driven by continued strong sales of iPhone, services and wearables.

Apple’s revenue from digital content and services – including the App Store, Apple Music, iCloud, AppleCare and Apple Pay – climbed 31% year-on-year to US$9.5 billion.

Services are now the second-largest contributor to Apple’s revenues after the iPhone, which saw sales increase 20% year-on-year to US$29.9 billion.

Services also mark one of Apple’s biggest revenue growth areas, with Apple’s smaller ‘other products’ segment the only one to experience bigger revenue growth at 37% year-on-year.

Other products, which include sales of Apple TVs, Apple Watches and AirPods, accounted for US$3.7 billion in revenues during the quarter.

Apple’s remaining two product categories, iPad and Mac, each saw revenues decline 5% year-on-year to US$4.7 billion and US$5.3 billion respectively.