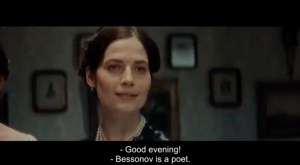 The 12-part series, produced by NTV Broadcasting Company and Russian World Studios, will be broadcast on ERT3.

The Road To Calvary, produced to commemorate 100 years of the October Revolution, is based on the novel by Alexey Tolstoy. It is the first Russian drama DMG has represented.

Commenting, DMG CEO Nadav Palti said: “We are delighted to see the sale of The Road to Calvary to Greece. Not only is it a brilliant production, but it is also rich educational content and an engaging format. It has the potential to deliver excellent ratings in Greece, as well as across the globe”.

Αlexandros Kanter Bax, director general of ERT3, added: “We are excited about the acquisition of this beautiful series. Russian cinematography has always been very popular among the Greek audience. We trust it will be a hit in our country as it was in Russia”.

Timur Weinstein, general producer at NTV, said: “As one of the largest producer of action-packed dramas in Russia, NTV creates content that is in high demand on domestic and foreign markets. The Road to Calvary symbolises the new level of quality of our series production. Dori has told us there is a huge interest in the series, and we hope to see its success in Greece as well as in other countries.”