Record-breaking format Love Island has taken the UK by storm this week becoming the most demanded show by far, according to Parrot Analytics data.

ITV had already revealed that the format’s season four premiere had broken records, peaking with 3.4 million viewers and a 16.4% market share on its ITV2 channel. Parrot Data now shows that the dating series gained over 10 million demand expressions. 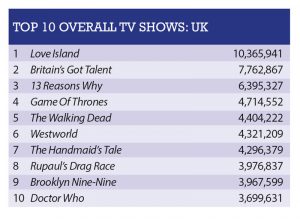 13 Reasons Why has had a stellar second season premiere, drawing 2.6 million viewers in its first three days of release, according to Nielsen data. It topped the purely digital originals list and has been a smash hit across territories.

On the overall list, which includes both broadcast and digital series, other highly demanded titles include Britain’s Got Talent, which gained 7.7 million demand expressions in second place, and Game of Thrones, which gained 4.7 million in fourth place.

Westworld and The Handmaid’s Tale also held a place in the top ten overall list, after both titles recently launched their second series in the UK. 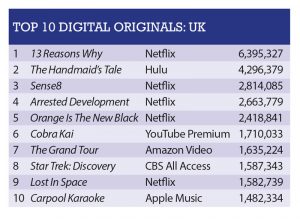 The pressure may be piling up for Netflix as varied streaming services are increasingly appearing with highly demanded titles. The UK’s digital top ten highlights this in particular with Apple, YouTube, CBS and Amazon series all making an appearance on the list. Previously these spots were safely secured for Netflix titles.

Joining the band of streamers are CBS All Access’ Star Trek: Discovery with 1.5 million demand expressions and Apple’s Carpool Karaoke with 1.4 million. Apple Music’s title enters the list on the back of a second season renewal for the title.

Netflix’s Sense8 generated 2.8 million demand expressions on the back of the series finale episode that premiered on the American streaming service on June 8.