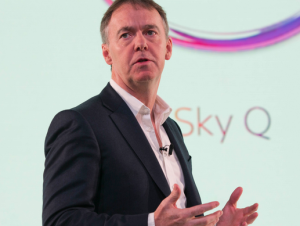 Sky reported a 10% increase in earnings for the nine months to March 31, despite what CEO Jeremy Darroch (left) described as a “challenging consumer environment”.

Announcing results for the first nine months of its financial year, Sky said that earnings before interest, taxation, depreciation and amortisation (EBITDA) came to £1.7 billion – up 10% compared to the same period a year earlier.

Like-for-like revenues increased by 5% to £10.1 billion owing to good growth across all territories and categories, with Sky surpassing £10 billion at the nine months stage for the first time.

“It’s been a good quarter for Sky,” said Darroch. “Looking ahead, we have the right strategy and abilities in place to provide customers with the best content, products and service.

Whilst we expect the consumer environment to remain challenging, the business is in good shape and we remain on track for the full year.”

Sky cited the further development and rollout of Sky Q as part of the business’ ongoing transformation, with the advanced TV service now found in 2.5 million homes in the UK, Ireland and Italy. It is also due to launch in Germany and Austria on May 2.

Other recent developments include a deal with Netflix to bundle the full SVOD service onto the Sky Q platform, the extension of Sky’s Premier League rights in UK to 2022, and the launch of Spotify on Sky Q, which is due to go live next week.

“We’re continuing to expand the growth opportunity of the business by concluding landmark agreements in Italy with Mediaset to launch a Sky pay TV service over DTT for the first time, and with Open Fiber to access their next generation fibre-to-the-home broadband network and launch our own triple-play service in this market,” said Darroch.

In terms of the company’s future ownership, 21st Century Fox’s offer for the shares of Sky that it does not already own is still being reviewed by the Competition and Markets Authority, which is due to send its final report to the Secretary of State by May 1. A final decision is then expected by June13.

Comcast announced a rival offer for the company in February, but Sky said that: “Since no firm offer has yet been made by Comcast or any other third party, Sky shareholders have been advised to take no action.”