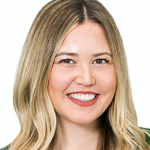 Delmore has been named senior director of development at the Red Arrow Studios-owned 44 Blue.

Working out of LA, she’ll work on development and sales of new ideas to cable, broadcast, syndication and digital platforms.

At 51 Minds, she was director of programming, developing and selling shows to History, VH1 and MTV among others.

Before that, she worked in development for Viacom-owned VH1, where she notably retooled AOL digital series Candidly Nicole as a long form series.

It is part of the ProSiebenSat.1 Media-owned Red Arrow Studios group that was formed towards the end of 2017 upon Red Arrow Entertainment’s merger with multichannel network Studio71.