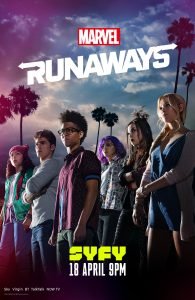 Runaways will premiere on 18 April, with Siren following in May and Stitchers later this year.

Marvel’s title tells the story of six diverse teenagers who can’t stand each other, but must unite against a common foe – their parents.

Sirens is set in a coastal town that is legendary for having once been home to evil mermaids. It tells the story of a battle between man and sea as the predatory beings return to reclaim the ocean.

Stitchers follows a young woman, who is recruited into a covert government agency to be ‘stitched’ into the minds of the recently deceased to decipher mysteries that otherwise would have gone to the grave.

“As the destination brand for science fiction and fantasy genres, these new shows deliver on our brand promise, engaging our fans with new superhero action from the Marvel Universe to a unique twist on the legend of mermaids, along with mind-bending mysteries.”