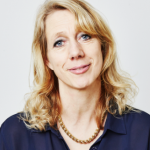 She will lead Chapter One as managing director, aiming to create high-end television drama and film.

LA-based producer and management firm Anonymous, which has been long been connected with a UK launch, is partnering with talent agencies Casarotto Ramsay and United Agents to launch the prodco.

Gardiner (pictured) will join Chapter One in June, leaving her role as head of drama at Howards End and Chimerica producer Playground.

She had been with Colin Callender’s transatlantic producer since it launched a London office in early 2015, having left a commissioning editor of drama role at UK terrestrial Channel 4.

Chapter One will run independently of its parent companies, who represent many top level British and US actors, directors and producers. Gardiner will initially looking to build out her team.

“Chapter One is going to be a wonderfully exciting and creative new presence in the television and film landscape and working with the three partners and their top level talent, amongst others, is an exciting new opportunity to produce outstanding premium drama,” said Gardiner.