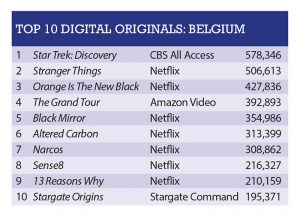 Parrot Analytic’s demand measurement system provides insight into TV demand in specific regions regardless of platform or streaming services, and this week, Belgium has thrown a surprise series in the mix.

Stargate Origins, an online miniseries, has come in tenth on its digital originals list despite appearing on MGM’s Stargate Command, which is only available in the US.

The series premiered on Stargate Command with three episodes on February 14.

Belgium’s top ten digitals list was topped by another sci-fi favourite, Star Trek: Discovery, which appears on CBS All Access.

Following the title are Stranger Things, Orange is the New Black, The Grand Tour and Black Mirror, in that order. Netflix newcomer Altered Carbon (pictured) also made an appearance in sixth place after its February 2 release. 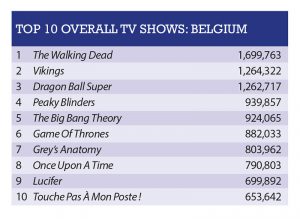 Japanese animated series Dragon Ball Super made it to a surprising third place on the overalls list, followed by UK drama Peaky Blinders, The Big Bang Theory and Game of Thrones.

Grey’s Anatomy, Once Upon A Time and Lucifer came in seventh, eight and ninth place followed by French TV format Touche Pas A Mon Poste! (It’s Only TV).