Game of Thrones writer and producer George R.R. Martin has landed a series on Netflix. 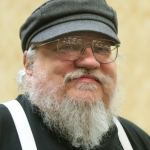 The streaming service has acquired non-US rights to the upcoming Nightflyers, to which NBCUniversal-owned Syfy has given the greenlight.

The series is based on Martin’s novella and 1987 feature film of the same name, with Jeff Buhler (Jacob’s Ladder) writing the adaptation.

Production will take place in Ireland, with the Irish government supporting it through its Culture, Heritage and Gaeltacht and the Irish Film Board.

Nightflyers, which landed a pilot order last year, will follow eight maverick scientists and a powerful telepath who embark on an expedition to the edge of the solar system in the hope of making contact with alien life.

Gretchen Mol (Boardwalk Empire), Eoin Macken (The Night Shift) and David Ajala (Fast & the Furious 6) are among the cast.

This week, it emerged the final season of Martin’s Game of Thrones, which airs in the US on HBO, would not launch until 2019.